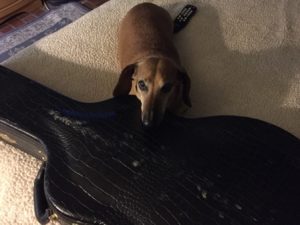 Chick Corea said, “You’re great! Not only good technically, but you communicate – you let your audience into your music – that’s valuable for a musician, but not every musician does it!“

Jeff Lorber said, “I enjoyed your music very much, and I think you are a very talented musician”

Stanley Clarke said, “I enjoyed listening to it”

“Hi Jon! This is Kurt. I’m not sure how well you remember me, a student of yours from roughly 30 years ago.
I wanted to say drop a note and say thank you for helping me get down the basics (as well as the parts from Hell’s Bells, and I forget with Pink Floyd song).

I still don’t practice like I should, but I love the confidence you gave me to tinker around and dabble with the guitar. It’s easier for me to spend money on gear than time on practice.

But I’m glad you’re still teaching. That’s a true gift. Thank you. You helped put my life on a different path.”

“I’m a 50 year old, who has spent the past 35 years playing a drumkit.  Over the past 15 years, I’ve been picking up bits and pieces of guitar playing in my bands of all levels – from paid headliner to weekend warrior.  I made the decision to go all in on the guitar, and Jon has been a miracle worker with getting me to where I wanted to go. I’m now writing and recording covers and originals all by myself, with just 3 months of steady guitar tutoring.

I wasn’t interested in scales or music theory. My goal was to be able to play and hold my own in a musical setting on the guitar. Jon let me pace my own lessons, and guide me to learn and experiment with all types of playing, from Zeppelin, to Rush, to the Police. His recall and abilities are top notch professional, and he has such a huge, vast depth of knowledge of everything “guitar” that just making small talk with him will improve your appreciation for the instrument.

Jon’s library of transcriptions is enormous and the work that he has put in, over 4 decades, is open to his students. He has songs from every style and era, plus anything else you might be interested in.

His ear for pitch is uncanny, and he can quickly figure out which direction to point you in to get the results you want. He is fluent in styles from classical to metal and everything in between. I look forward to his lessons everyweek.” -Dan T

“Jon:
Just wanted to reiterate that I much appreciated your patience and instruction over the last 17 odd months in trying to teach an old tyro to play guitar.  When I started a year ago last January, I couldn’t play diddly squat. But over the intervening months – thanks to you – I’ve managed to become fairly competent playing basic chord songs, of which there are a myriad that I like.

I’ll never be lead guitar material, but hey, Glenn Frey among many others made a hell of a living strumming along….

Thanks el mucho & all the best.”- Chris B

“Probably the BEST Guitar Teacher in Tucson! Jon taught my teenage son for several years and did a fantastic job. Patience, expertise, and in depth knowledge of Bass and 6 String Guitars will make your learning experience one that would be hard to find elsewhere. Besides my son, I took Bass lessons also, and found out first hand at what my son experienced. I would be happy to answer any email question about Jon’s ability and style of teaching.” – Jim C

“I have been playing guitar off and on for over 30 years. Most recently while living in Chicago for a year I was re-inspired and took several different guitar classes. When I returned to Tucson I wanted to continue with lessons and I found Jon. Quite honestly, his knowledge of theory and technique, and his methods for conveying those, are awesome. Finally I have found someone to give me the tools and knowledge I needed to tie together all those loose ends I had floating around with theory and playing – both rhythm and lead. Jon is an excellent instructor and I would recommend him to anyone of any skill level. He has the utmost patience and a great attitude toward teaching – he makes it fun!”- Shawn L

“I first met Jon in 1987 when I began taking lessons at the age of 11. Jon’s skill level is unmatched, but that didn’t affect his ability to work with true beginners. 20 years later, after moving all over, I came back to Tucson and back to Jon. His 40/30/30 focus split between technique / drilling, theory and “requests” (teaching you a song or riff of your choice – Jon has personally tabbed thousands of songs from every guitar applicable genre). For young students, this guarantees continued interest (nothing beats playing your favorite songs and playing them right). All the while moving forward with technique and theory. Of course, this ratio is tailor-made to the student’s goals. I cannot recommend Jon Rittmann more that I already have to many guitarists. He is a true guitar artist with passion for pushing the limit, even at his level… which is 11.” – Jeff W

“I have taken guitar lessons from Jon for nearly a year, and am delighted at the result. He is extremely knowledgeable and a terrifically patient teacher. He stimulates me to try different styles of music and pushes me forward without being pushy. Very energizing to take lessons from him. Also, he is a genuinely nice person, an added benefit.” – Larry W

“John is great teacher as well as an exceptional musician. He truly has a gift for teaching and I recommend him without reservation. You won’t be disappointed!” – Dan P

“My son took guitar lessons from Jon Rittmann for three years. Jon is an excellent teacher and we highly recommend him!” – Kelly B

“I was a student of Mr. Rittmann for over four years and in that time I learned more about playing guitar than I thought possible. You should definitely take lessons from him, he is a wonderful teacher and a personable guy.” – Thomas G

“This man is not only an amazing guitar player, but a great musician, and a really cool laid back guy. While most guitar teachers I’ve had have been condescending, and had this certain offsetting attitude about them, Jon has none of that. He takes you as you are, and is very humble and down to earth. If you have a favorite guitarist or musician in mind, Jon can teach you close to every single song and technique about that guitarist, with his huge library of hand crafted, accurate, by-ear tabs. Every little nuance, down to the last minuscule bend. He changed my way of thinking not only about guitar, but music as a whole. Go in with an open mind, and a willingness to learn, and I promise you will not be disappointed.”- Yoel K

“I took lessons from Jon for 5 months. We worked on various blues scales and blues licks. The Texas blues were particularly fun to learn and very useful. Jon taught me songs that were fun to play and challenged my guitar skills. His lessons were fun and great to take home to work on . Jon approaches guitar sessions professionally and got a lot done in the half hour we spent each week.” –Mike P

“An amazing teacher, who will not yell or get upset even if you don’t play the cord correct. You can learn a song and play it up to speed in record time. Makes learning the guitar, or Bass guitar alot of fun.”- Matthew S

“Jon’s positive encouragement and affable personality are an added bonus to his awesome background in guitar. I began lessons with Jon, this January, and love the challenges he offers me. I wasn’t much more than a beginner (knew some basic chords) and now he’s got me practicing scales and songs in a variety of genres: rock, jazz, Spanish, and Celtic. You can really “feel” the progress you’re making as you go along. Jon’s vast experience allows him to share all those “little tips” that make a “big difference.” – Bill M

“Jon is an excellent teacher. In the past few months I have learned a number of essential jazz standards, my playing has improved considerably. He has challenged me, and offered guidance for me to succeed.”- Jim B

“Great teacher and very knowledgeable of music. Can tab out any song you need and will help you build great chops! Also, the studio was very comfortable which is a plus.”- Mike H

“More than 40 years ago, I was a bad guitar player in a bad rock n’ roll band. Then I stopped playeing completely until about 6 years ago when I started to take guitar lessons from Jon Rittmann. He gave me great finger exercises to get up some speed, had an excellent technique for quickly teaching me all the jazz chords, and began to teach me challenging but manageable arrangements of jazz standards, using tabulature. I’ve also learned a considerable amount of music theory from him and my appreciation of music has grown by leaps and bounds. He has inspired me to practice, but with a light touch that lets me leave town on business for weeks at a time. His teaching studio is well equipped. As I’ve approached retirement, playing has become one of my greates sources of pleasure. He is not only my teacher, but my friend as will.”- Ted S

“I took lessons from Jon for about 6 months. I had already been playing guitar for several years but had gaps in my musical knowledge (because I learned mostly from tabs). Jon created lessons specifically for my music theory needs and general interests. He almost always coupled the lesson with a popular song that demonstrated the learning objective. He was an excellent teacher. I recommend him to everyone.”  – Eric R

“Jon is a great music teacher and a great player. I have been taking bass and guitar lessons from Jon for over a year now, and I continue to be totally impressed by his playing and his ability to take his enthusiasm for music and transmit it to others. He is a good-natured guy with a relaxed, easygoing approach to teaching. His ability to break down a song that you want to learn, even if he is not that familiar with the song, learn it and play it note for note just like the recording, transcribe it into tab form, and teach you that song right there and then in a matter of 20-30 minutes is an amazing thing to witness. Just ask him to play the solo from Pink Floyd’s Comfortably Numb, and you will be blown away–guaranteed. He will nail the solo, and then show you how to play it! Unfortunately,I have had to take a couple of months off from taking lessons from Jon because of my work, but I am really looking forward to resuming my lessons with him. I really am missing the weekly lessons, which have come to be an important part of my weekly routine, and I look forward to getting back to it! It’s a very fun experience to learn to play so many great songs in a fun, relaxed atmosphere.”
– Gerry M